is looking for a a number of coaches for this spring season.

The open positions are:

Two modified B boys coaches and a varsity girls coach.

Central High School is looking for a Head Varsity Coach.

"Brighton is seeking a new Head Boys Varsity Lacrosse Coach for the Spring of 2023.

"We are looking for candidates that are knowledgeable about the game, have had head coaching experience and look forward to running a program."

On Saturday, November 5th, the Rochester Chapter of USA Lacrosse will install its 28th class. The event will take place at the Harro East Ballroom (155 N Chestnut st, Rochester, NY 14604) with a social hour beginning at 6:00 pm.

The 2022 class includes five individuals, and one team.

Bishop Kearney scheduled twelve games but dropped out just before the tournaments at the end of the season. There were 870 players on the final rosters, down five players from 2021. Rush-Henrietta and Victor carried the largest roster with thirty-seven players and Batavia-Notre Dame had the smallest with thirteen. 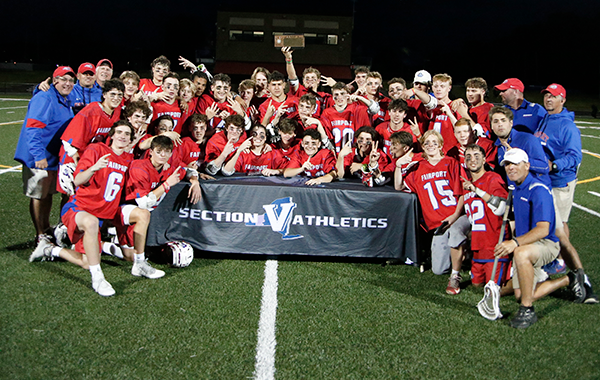 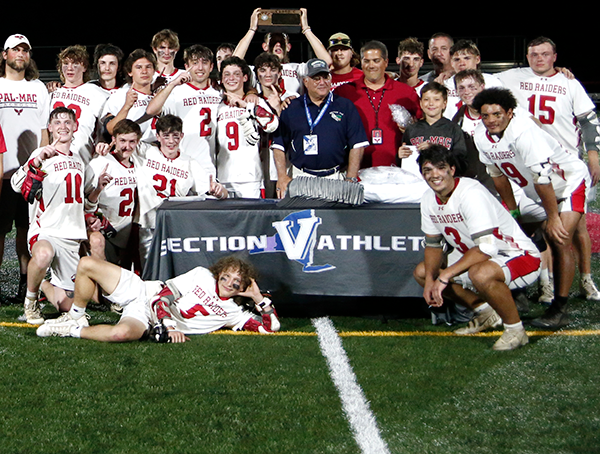 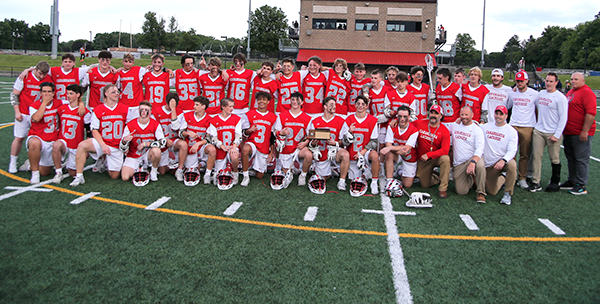 Assistant Coaches of the Years were Sean Doyle and Tim Byrnes from Hilton (d-1), Eric Fisher from Irondequoit (d-3), and Jerry Dawes from Penfield (d-2). 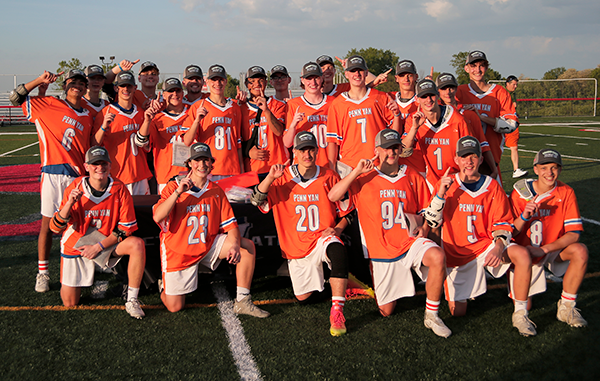 Among the awards from the Greater Rochester Area Lacrosse League (GRALL), was Player of the Year senior attackman Jamie O`Neil.

After the regular season, the Section V tournaments were conducted. Fairport (Class A), Canandaigua (Class B), Pal-Mac (Class C) and Penn Yan (Class D) were the Sectional Champions in 2022.

There were All-Tournament Teams this year (after a one-year absence) and there were MVPs for each class. Selected as MVPs for classes A, B, C and D were Joey Giggie (Fairport), Jaxon Grant (Canandaigua), Will Nichols (Pal-Mac) and Teagen Fingar (Penn Yan).

The SportsFive/Section V Players of the Year were faceoff specialist Quinn Nolan (Pal-Mac) in offense and Eric Platten (Canandaigua) in defense. The Sportsman of the Year was Curtis Denison (Geneva).

After a two-year absence, the New York State Tournaments were back and sectional champions went on to play Section VI champions in the Western Regionals (quarter finals). In Class A, Fairport beat Clarence and then lost to Baldwinsville in the semifinals. In Class B, Canandaigua Beat Hamburg, and then West Genesee to reach the finals where they fell to Garden City. In Class C, Pal-Mac lost to Lake Shore in Buffalo and Class D, Penn Yan lost to Akron.

At the end of the season at least forty-nine seniors have made college commitments. They will become part of over three hundred players from Section V who are currently playing at all college levels.

The New York State Sportswriters Association, posted their 2022 All-State lacrosse teams today with twenty Section V players included on the lists. There are two divisions: Large Schools (Classes A and B) and Small Schools (Classes C and D).

At their "Year-End Gathering" the members of the Genesee Valley Lacrosse Officials Association announced their annual Frank Mangione Award for Excellence award winner.

The award is given to a person who has demonstrated the highest ideals of professionalism, leadership, passion and above all, respect for the game of lacrosse at any level both on and off the field. Mangione served in many capacities within the organization for more than forty years.

The award, this year, was given to Rob Cantabene, a long-time  the organization though the many COVID issues which included shortened seasons, no season, masks, vaccines, etc. "He has served with integrity and a sense of fairness, always making the right decision", said incoming President Jim Malloy.

The "Iron man Award" was given to Luke Paulus for having officiated the most games this season (34).

The "annual report" for the organization included: 625+ games officiated and 1500 assignments. 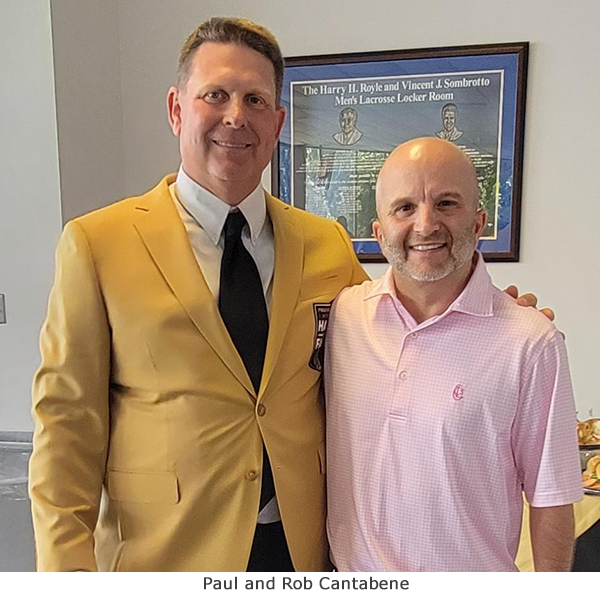 It was a big month for the Cantabene family as not only did Rob win the coveted Mangione Award, but it was announced that his brother, Paul Cantabene, will be inducted into the inaugural Pro Lacrosse Hall of Fame class later this year.

Paul, a standout lacrosse faceoff midfielder at Irondequoit before playing at Loyola College. He served as an assistant coach at Maryland, Towson, Johns Hopkins and then as Head Coach at Stevenson from 2005-present. His 2013 team has a perfect season (22-0) and won the NCAA Division III championship with a win over RIT.

As a professional he has played in the MLL (Bayhawks) and the NLL (Baltimore Thunder, Pittsburgh Crossefire, Washington Power and Philadelphia Wings). He is a member of a number of Hall of Fames, including the Rochester Chapter of USA Lacrosse.

Thirty-four teams had already cleaned out the lockers and only Canandaigua was still playing today after an exciting season during which the Braves continually improved. Today, however, they were playing against a team from Garden City which, very much like their own team, had a very strong defensive unit and the willingness to work hard.

GARDEN CITY 8  - CANANDAIGUA 1  - NYS CHAMPIONSHIP - The game started out with both teams testing each other, looking for weaknesses. That was not easily done as Garden City has at least eight players committed to college lacrosse programs and Canandaigua has five. As expected the game started with faceoffs. Jack Cascadden, 6`3`` and 215 headed to Cornell next fall won 9 of 13 draws to give the Trojans more than fair share of ball time. He also ended the game with 2g-1a.

After a couple of trips up and down the field, junior Jack Archer scored on a sweep from out front at 7:15 and then scored again at 6:20 after beating his man on an outside dodge. Freshman attackman Drew Williamee scored on an inside roll dodge at 1:15 and the quarter ended at 2-1.  There was no scoring in the second quarter and Garden City took that 2-1 lead into halftime.

After halftime adjustments, the Trojans took off with four unanswered goals in the third quarter including three in a a little over a minute as Archer scored at 7:20 and seven seconds later Cascadden won his draw and took it to the goal. Henry Gibbons scored on a backside dodge to end the third quarter with the Trojans up 6-1.

Canandaigua in the Finals!

Section V sent two teams to the NYS semifinals and Fairport lost to a strong Baldwinsville, and Canandaigua used defense and faceoffs to beat West Genesee and move on to the championship round on Saturday.

BALDWINSVILLE 13  - FAIRPORT 5  - NYS SEMIFINALS -Although the Red Raiders scored the first goal and led at the end of the first quarter, the Bees scored five unanswered goals before the half and cruised to the victory. 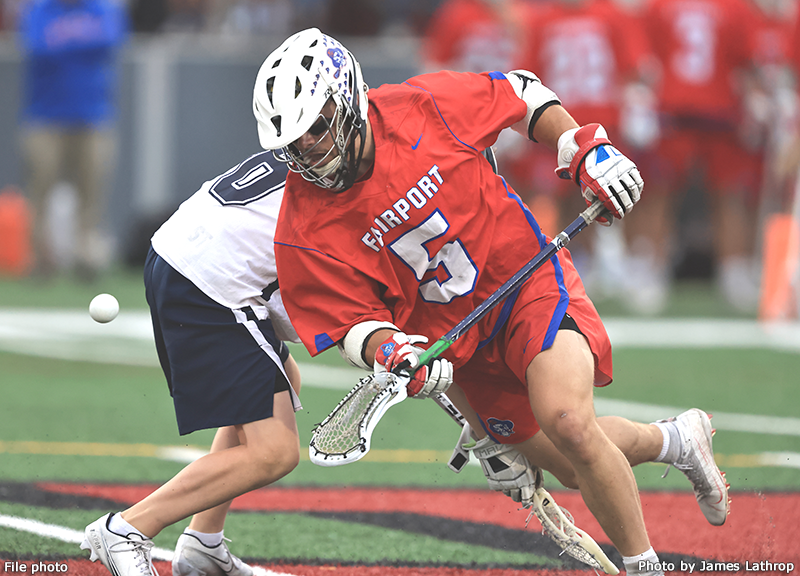 The Baldwinsville defense pressed hard, were strong and quick and they were skilled at driving the ball handlers into doubles. On the other end of the field Trey Ordway led scoring with 4g and Colin Doyle had 1g-3a. Nicholas Cary made 5s (63%).  Baldwinsville will play Northport (Sect XI) at 12:30 on Saturday at Hofstra. Fairport ends their season at 17-4. Stats for Fairport were not available at post time.      [BOX SCORE]

WEST GENESEE 1  - CANANDAIGUA 5  - NYS SEMIFINALS -The Canandaigua offense scored the goals, but it was the defensive end of the field that won the game for the Braves and sent them to the Championships at Hofstra on Saturday. The last time that the Wildcats were held to one goal was in 2014 when Fairport beat them 10-1. The hard-hitting long sticks were tenacious, playing hard to the ball while closing off adjacent receivers and, in the goal, junior goalie Jack Faiola made a bunch of clutch saves that took the wind out of sails of potential Wildcat surges. 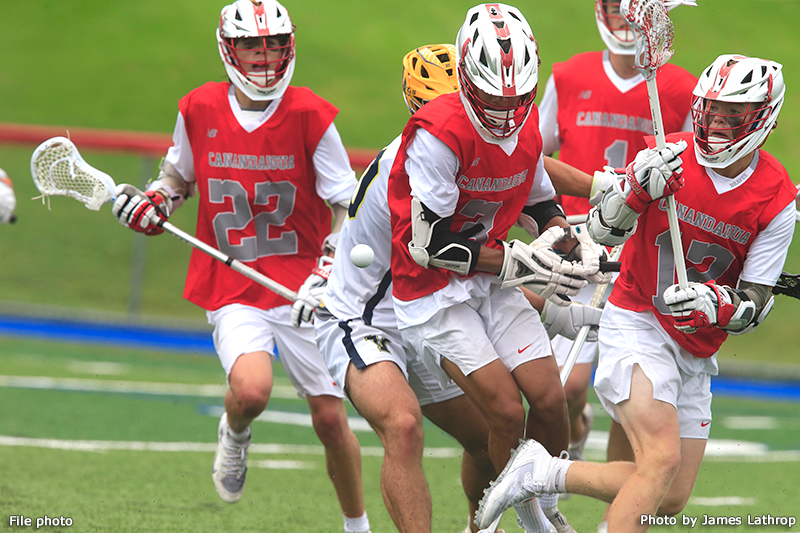 The Braves had most of the ball time in the first half, much of that due to the faceoff wins by junior faceoff specialist Luke McCrobie who seemed to come up with wins when they were needed most.

The lone goal in the first quarter was on a sweep by Jaxon Grant. Early in the second quarter sophomore attackman Sean Olvany drove to the crease and with 3:29 left in the half senior midfielder Elliott Morgan scored on a wild sidearm from outside. Liam Burns scored on a pass from Ryan Mahoney to give the Wildcats their only goal in the game. The half ended with the Braves up 3-1. 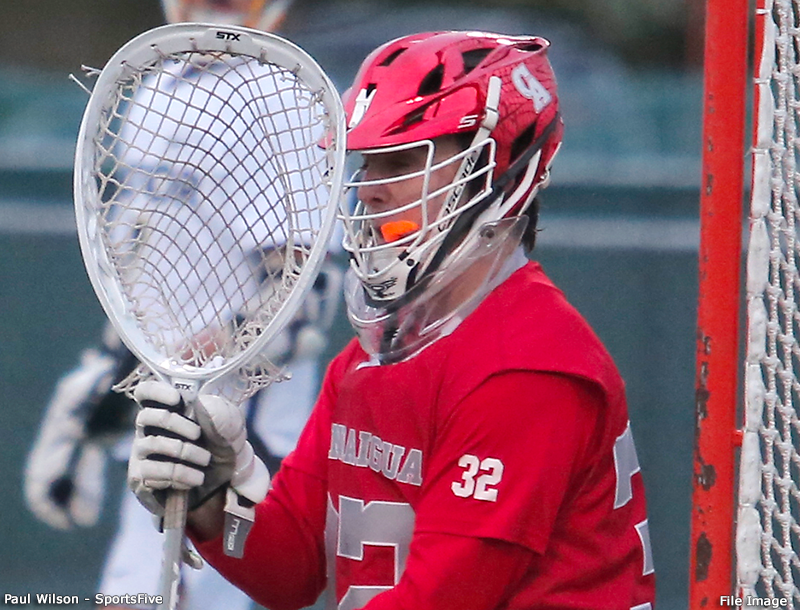 The third quarter was all defense on both ends of the field as goalies and defensemen limited shooter to outside shots. seniors Eric Platten, Mason Bolster and Brady Comella pressed hard on key players from West Genesee and knocked down passes that they then scooped up as pushed down field.

Sophomore middie Braden Gioseffi scored on a sweep at 9:28 and Olvany scored on the crease with a pass from junior attackman Nate Sheridan at 5:34 and the rest of the game was just waiting to see if the Wildcats could mount a comeback.

Canandaigua will play in the Class B Championship against Garden City (Sect VIII) at 3:00 PM on Saturday at Hofstra University.      [BOX SCORE]

The Rochester Chapter of USA Lacrosse recently announced the 2022 Herb Fitch Lacrosse All Star Game player selections. After a COVID absence, this year's contest, featuring some of the best of the graduating seniors will be held on Wednesday, June 15th at Victor High School. The boys' game will start at 8:00 PM and the girls' play at 6:00 PM.

Tickets for the Senior All Star Games will be $5.00 for those 18 and up. Concessions will be available.

All players need to confirm their place or to decline their spot. Information is available on the registration form. 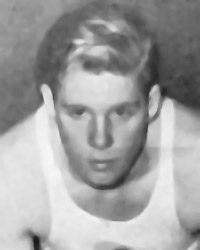 "The Herb Fitch Lacrosse Senior All Star Games are in memoriam of Herbert T. Fitch who is a member of the Greater Rochester Hall of Fame as well as the US Lacrosse National Hall of Fame. Herb was involved in the game for over 45 years as a player, coach, and official. He was a standout at Geneva High School that went on to compete and excel at Hobart College from 1938-1942. As well as being an amazing contributor to the game he was also a business owner and the mayor of Penn Yan. Herb loved this great game and watching the growth through the dedication of young athletes such as the ones selected for the Senior All Star games." (Chapter announcement)

There is also a free "Future All-Stars Youth Clinic" for boys and girls K-6. More information and the registration form is available.

The Genesee Valley Lacrosse Officials Association (GVLOA) handed out their annual Steven R. Morgan Sportsmanship Awards to one team in each Class.

The award is giving to a team that exemplifies sportsmanship at the coaches’ level, the players level, and the fans level.  Officials vote after every game by the men at the game. 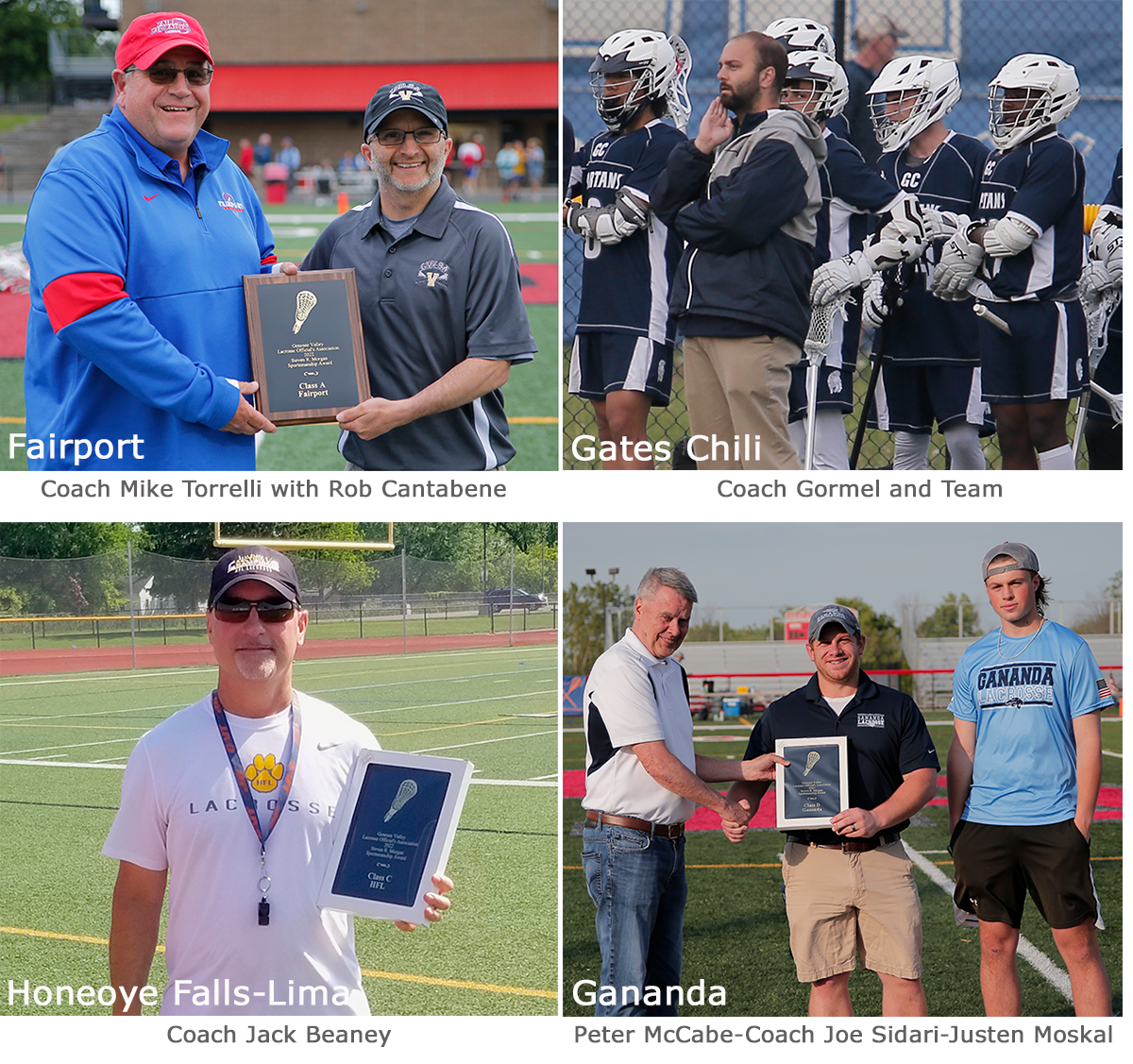 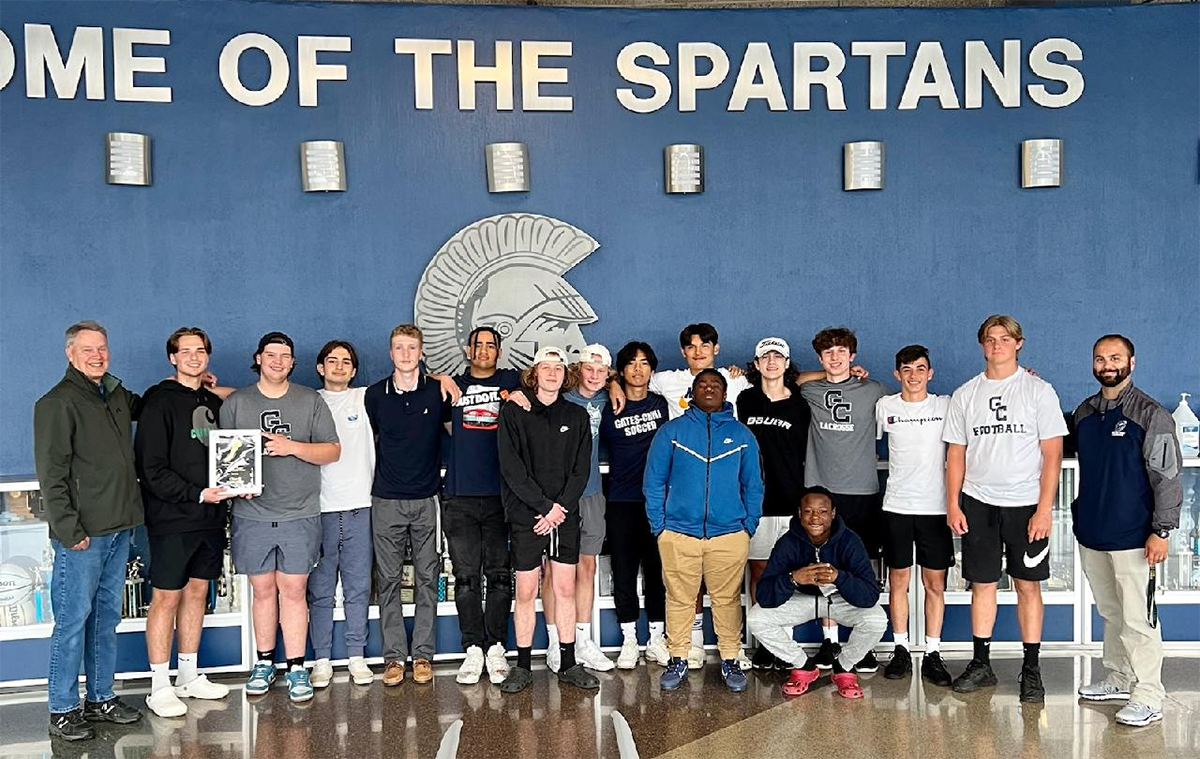 SPORTSFIVE REPORT:  The Head Coaches of Section V recently considered players who had been nominated for All-American and All-Academic awards. The awards, sponsored by USA Lacrosse, identify some of the best players from each area around the country. Each of the head coaches in the section is allowed to vote on each of the awards. 2020 All-Americans: Eli Adams, Noah Gibson, Thomas Gravino, Nick Hauman, Quinn Nolan and Eric Platten (2nd time). 2022 All-Academics: Brady Comella, Curtis Denison, Griffin Emerson, Louie Germain, Hunter Smith, and Mike Valent. Bob Scott Award: Noah Gibson. Coach of the Year: Eric Carlsen. Read the whole story...

This year, BLaxFive.NET is celebrating the start of scholastic lacrosse in 1922 when Geneva High School was the first team in the "area" to sponsor a scholastic team. During the preseason we have published stories about some of the noteworthy events of those early years and some more modern accomplishments. A list of the twenty-two stories is available here. 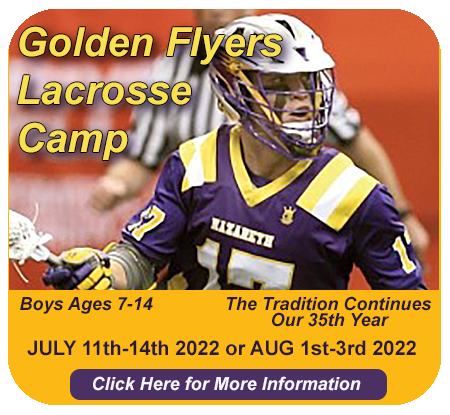 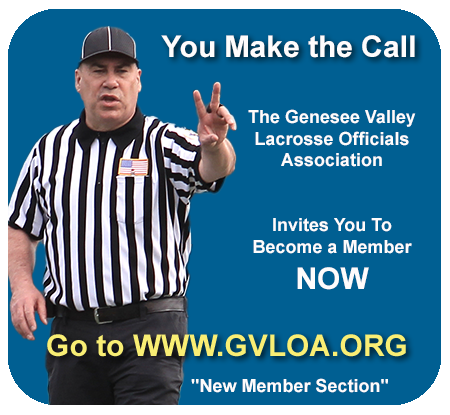 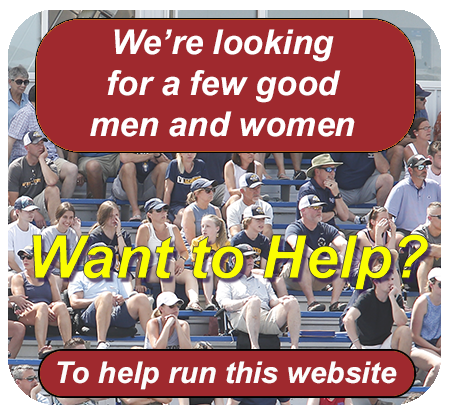 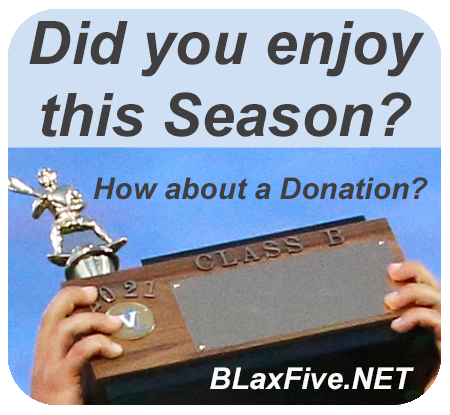 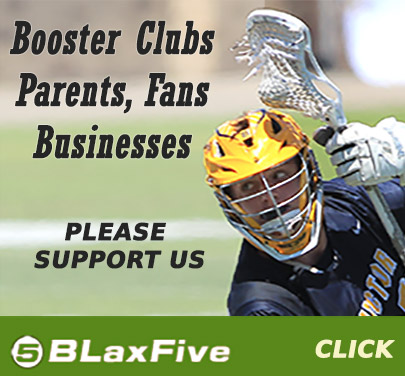